The Irish Moiled is one of our most distinctive cattle breeds. They are a hornless (polled) breed, red in colour and characteristically marked by a white line or ‘finching’ on the back and white under parts with red ears and red nose. But they can vary from white with red ears and nose to nearly all red. The face is often roan or flecked. The name Moile (or Maol) is derived from the Gaelic language and relates to the distinctive dome or mound on top of the head. They are of medium size (a mature cow can weigh up to 650kg) and are generally easy to handle with a placid docile temperament. Animals are also easily maintained on less acreage and less concentrate than most other cattle breeds

The Irish Moiled Cow can be relied upon to produce a calf every 12 months if kept in good health and body condition and is running with a bull. Artificial insemination is also successful. They will calve to a continental bull without difficulty and have sufficient milk to do a good job with the cross calf. They will continue to breed satisfactorily until at least ten years of age. Many have continued to 15years and beyond. Tradition has it that they are “big bellied” to consume and digest large quantities of poorer quality forage which was their traditional diet. They are ready browsers, especially of willow ash and ivy, which makes them ideal in extensive or conservation grazing situations.

In the dairy, yields of up to 5000 litres are being recorded on these extensive systems. In the suckler herd the cow will “milk off her back” to give the calf the best start in life. They are sound in hoof and leg and at home on most types of terrain. Moileds grow a thick winter coat and out-winter happily although being a heavy animal they will ‘poach’ soft ground. Silage/hay will be needed for out-wintering in most situations. Mineral supplements are advisable although concentrates should not be required unless cows start winter with no fat on their backs.

Female calves are either retained within the herd or find a ready market with other breeders of pedigree Irish Moileds. Irish Moiled bulls are normally of an excellent temperament making their use in even the smallest herds commonplace. They are extremely hardy and alert in the herd from an early age. The Moile bull can be used on suckler herds as a ‘maternal sire’ to produce easy kept, milky, nicely marked heifer replacements.

The Irish Moiled is one of the oldest of the surviving indigenous breeds of Irish cattle and the only surviving domestic livestock native to Northern Ireland.The myths and legends of Ireland refer many times to ‘red, white backed cattle’ and polled (hornless) skeletal remains have been dated to 640 A.D. It is believed that the Vikings raided Moilie cattle from Ireland in around 1000AD and today in Scandanavia you can find hornless cattle with similar colour markings to the Moilie in a breed called the East Finn. The breed was popular throughout Ireland in the 1800’s on a wide variety of habitats but thrived on the ground of the hill farmer particularly in the ‘drumlin’ country of South Ulster. However with the introduction of more specialist dairy and beef breeds numbers began to decline.

The decline in numbers was slower in Northern Ireland than in the rest of the island but even here by the late 1970s the pedigree herd numbered only thirty breeding females and two bulls, maintained by only two breeders. In 1979 the Rare Breeds Survival Trust (RBST) recognised the Irish Moiled as endangered and placed the breed on its ‘critical’ list. Enthusiasts began to work actively to revive the breed and their efforts have been rewarded ensuring that the Irish Moiled remains part of our proud agricultural story.

The original aim of the Society was to develop the breed as a hardy dual-purpose animal suitable for the needs of the hill farmers of Ulster. The cattle should be economical to keep on poor land, give a reasonable supply of milk and be capable, when crossed with a beef producing animal, of producing a good saleable store. It was decided that a lined-backed animal was the colour to be aimed for; red or roan with a white stripe down the back to be the predominant colour pattern for the Irish Moiled Cattle Society.

The impact of grazing by Irish Moiled and Dexter cattle on soft rush.

For further information about the breed the society can be contacted as follows;
The Irish Moiled Cattle Society
Clonarld
Killgordan
Co. Donegal
Republic of Ireland
F93D53V
Seceratary@irishmoiledcattlesociety.com
Further information can also be gleaned from the societies’ website and Facebook page. 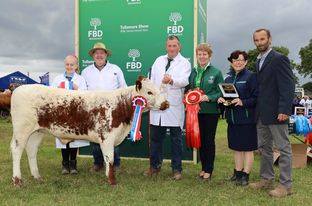 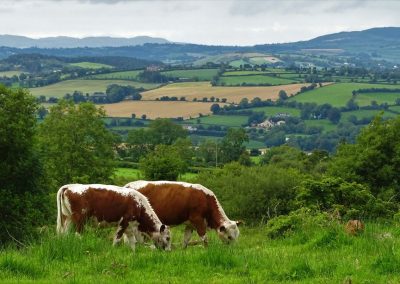 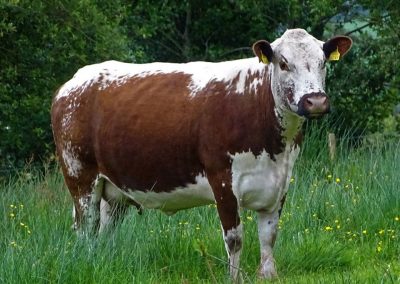